Nodes on Jet represent warehouses. It was designed this way so Jet can see how many products are located in each warehouse so that they can determine from which warehouse it is better for a seller to ship a product. 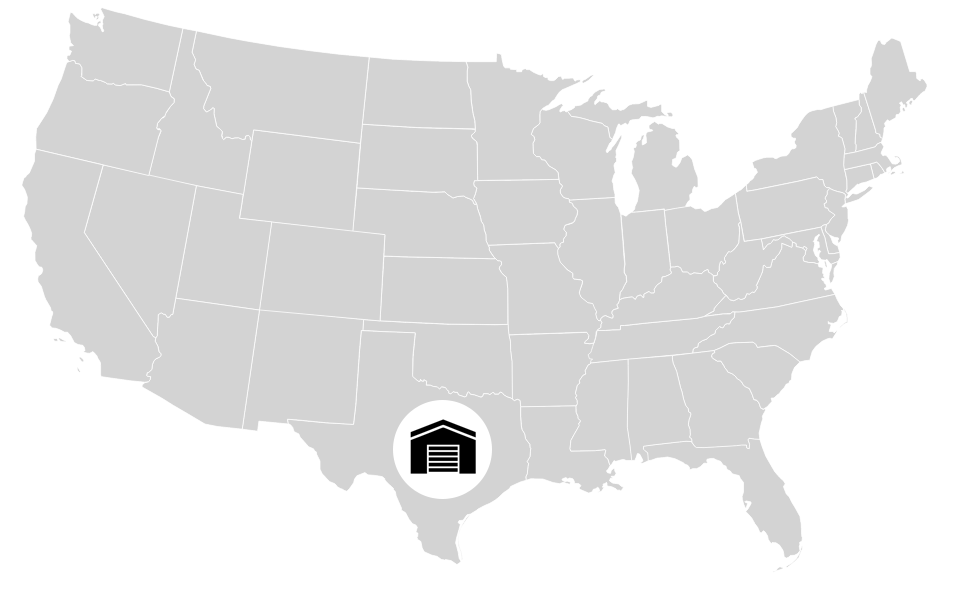 You need to go to Partner.Jet.com and add a new Node. Let’s call this one Texas since that’s where it’s located. 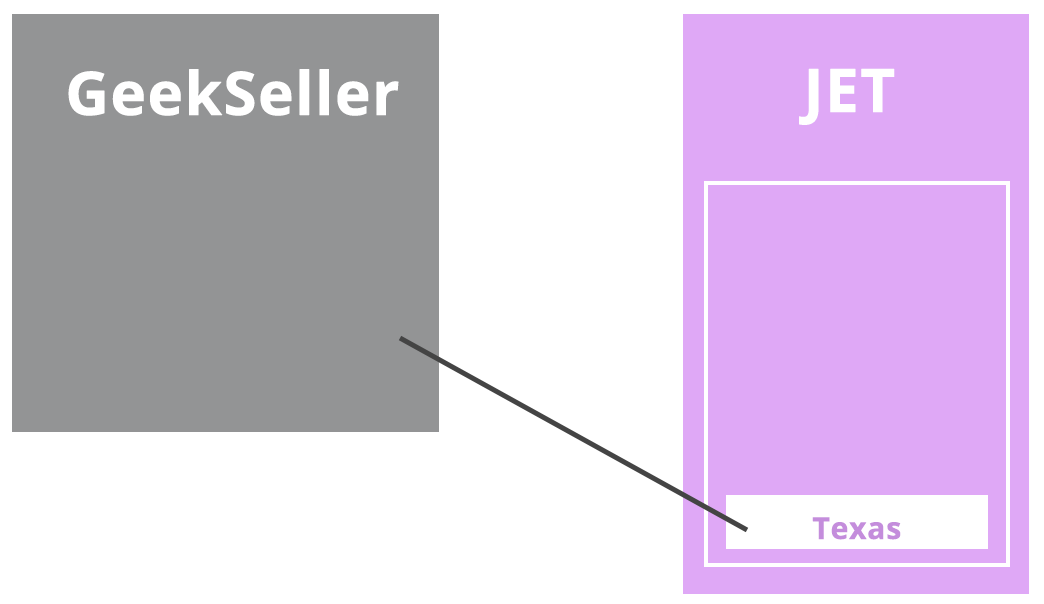 Now, GeekSeller sees this node and allows you to enter how many products you have in this warehouse, as shown below 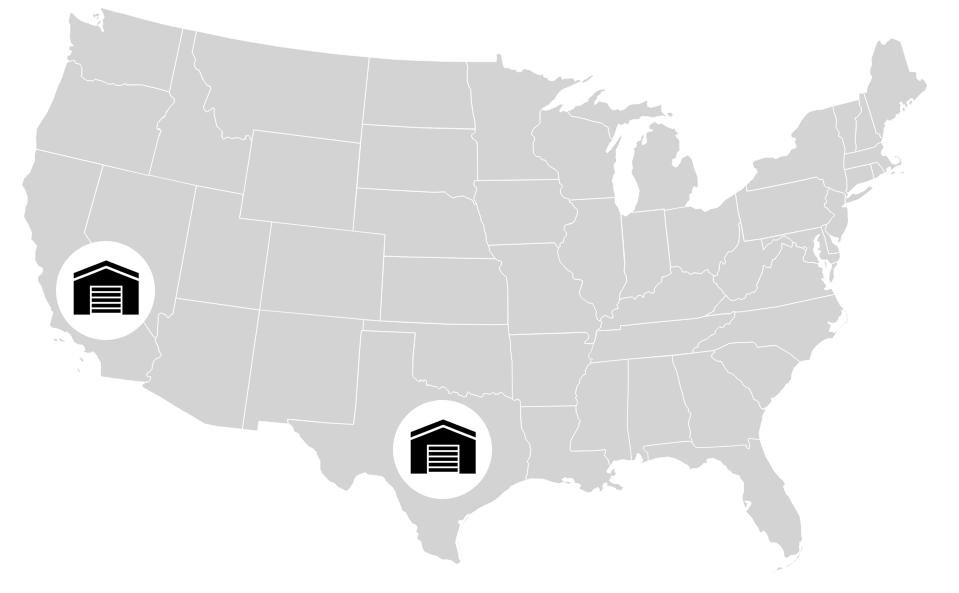 Let’s say you do so well that your business grows and you open a new warehouse in LA.

You would then add the new node for the new location and call the new node something like ‘LA Warehouse’ in your Jet Partner account. It will also be visible in GeekSeller. You’ll be able to control the quantity of each SKU for both of your nodes/warehouses. 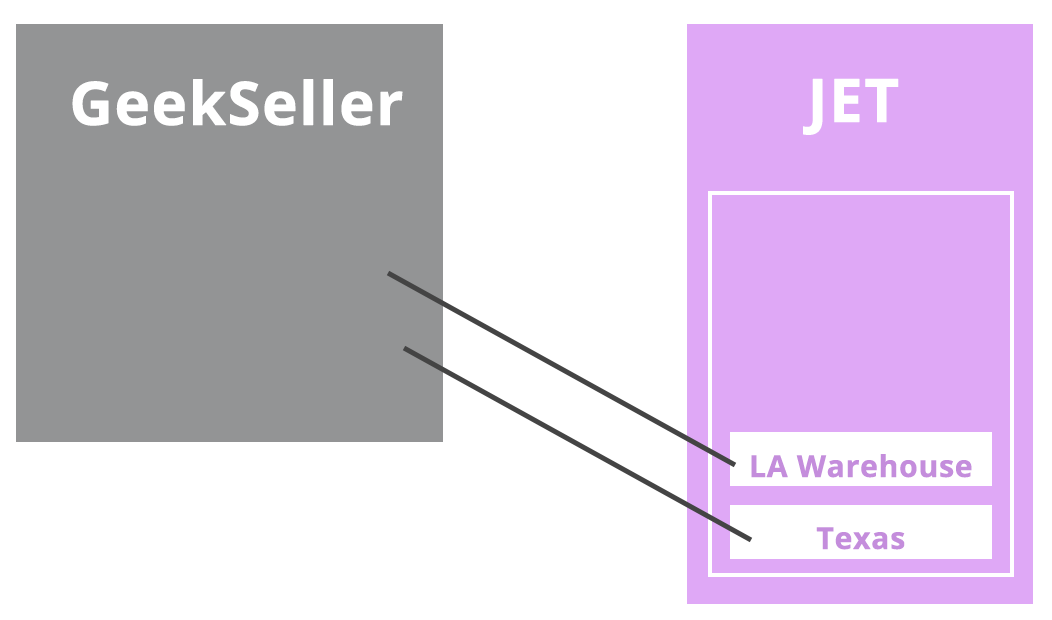 In GeekSeller it will appear just like the example below.
Zeros indicate that you do not have any units of a given product in that particular warehouse:

Let’s say you sell on Amazon and part of your inventory is housed by Amazon utilizing their FBA program. However, you also keep some inventory in your Warehouse in NJ.

In partner.jet.com you would create two nodes;

In order to update your FBA quantities on Amazon you will have to ship more inventory to Amazon. In this case, your quantity information is all updated on Amazon, so would not want to update quantity via GeekSeller. You want GeekSeller to get data from Amazon and send this to Jet.

From Extensions > Amazon you can indicate that FBA should be linked to the FBA node, while FBM should link to the NJ Warehouse.
At this point you will not edit quantities on GeekSeller at all, you will manage quantities on Amazon and GeekSeller will pull that data and send it to Jet. 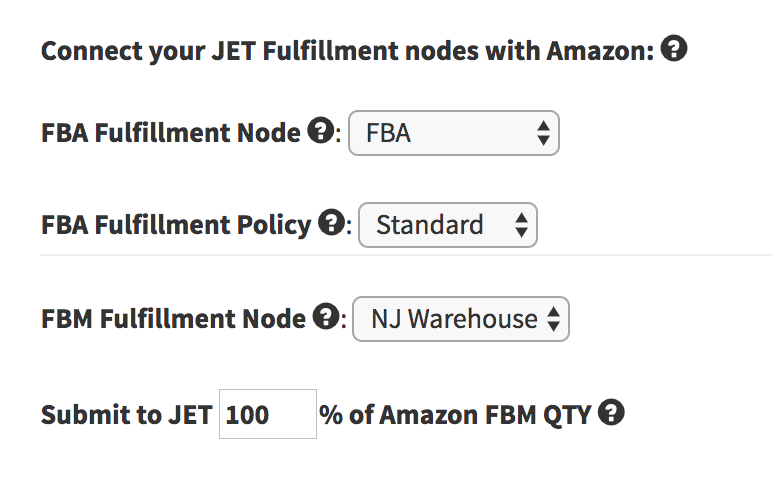 Remember that if you sell the same product on FBA and FBM, they have different SKU, so they will exist in GeekSeller as two separate product. On the product page when a product has 0 in the NJ Warehouse and a number larger than 0 in FBA, this is an FBA product and vice versa.

You can link them, too. Just remember that each FBM and FBA entity needs a unique Jet node.
With this set up you WILL NOT update inventory in GeekSeller, you’ll need to make changes on Amazon and GeekSeller will pull that data and submit it to Jet.

You can add as many Jet nodes as you need

For example, you have GeekSeller sending Jet quantities that you have in two FBA and two FBM nodes, so you update the quantities on Amazon and GeekSeller pushes it to Jet. Then you can add an additional node, called Texas, which is not linked to an Amazon account. That means you can now sell a product on Jet, which you do not have on Amazon.

For products housed in the Texas node, on GeekSeller the fields where Amazon inventory would be listed will be at 0. Inventory for this product would be manually entered in the ‘Texas’ field.
Please note that if you add inventory to a node that is linked to Amazon, GeekSeller will overwrite it with 0, because that SKU does not exist on Amazon.

Imagine nodes as baskets that hold quantity information for a product. If they are not connected to an outside source, you’ll manage them from GeekSeller. However, they can be automatically updated for example via EDI: 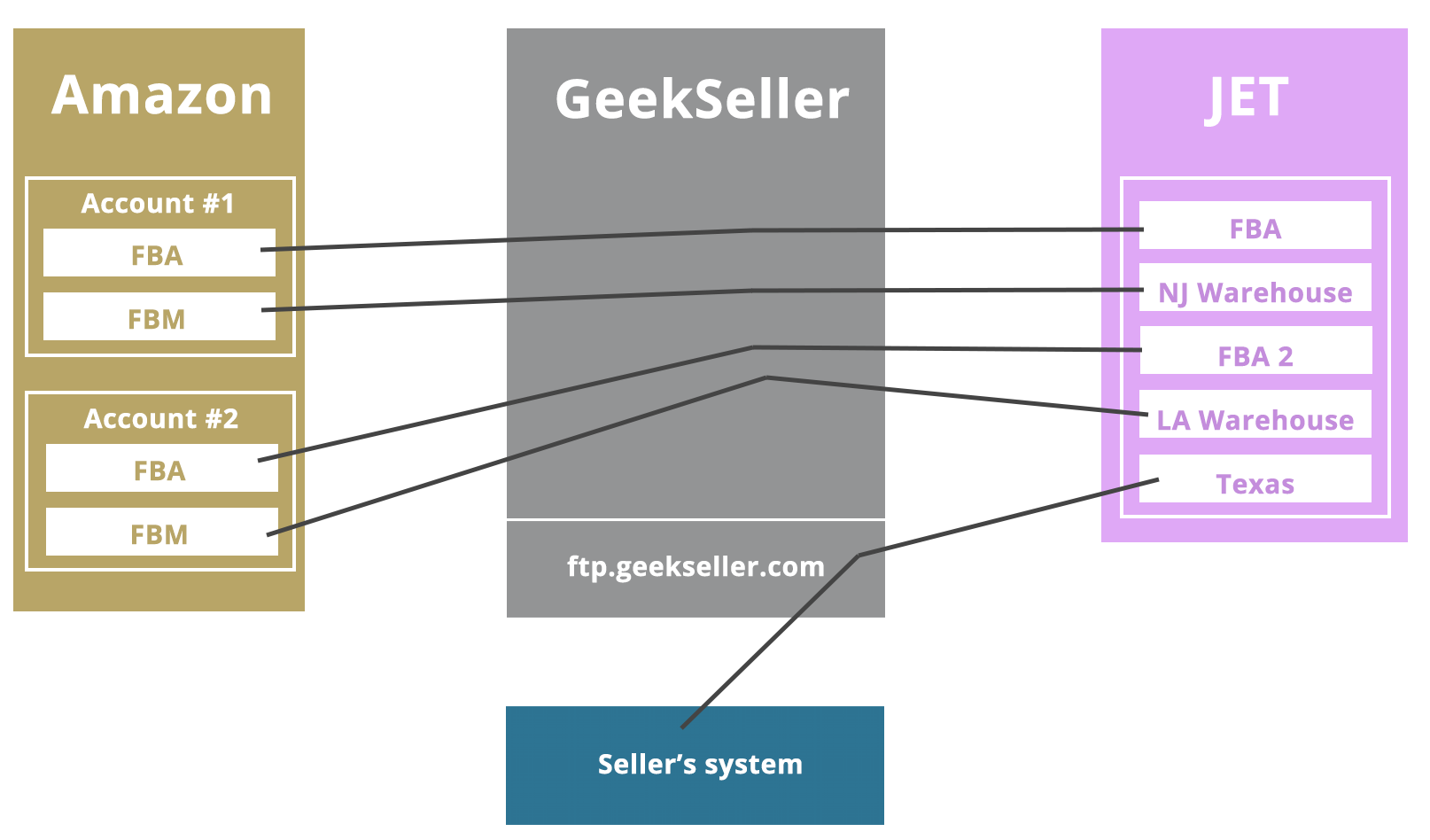 Nodes can be connected to external stores such as Shopify, where a seller may keep inventory information for their products: 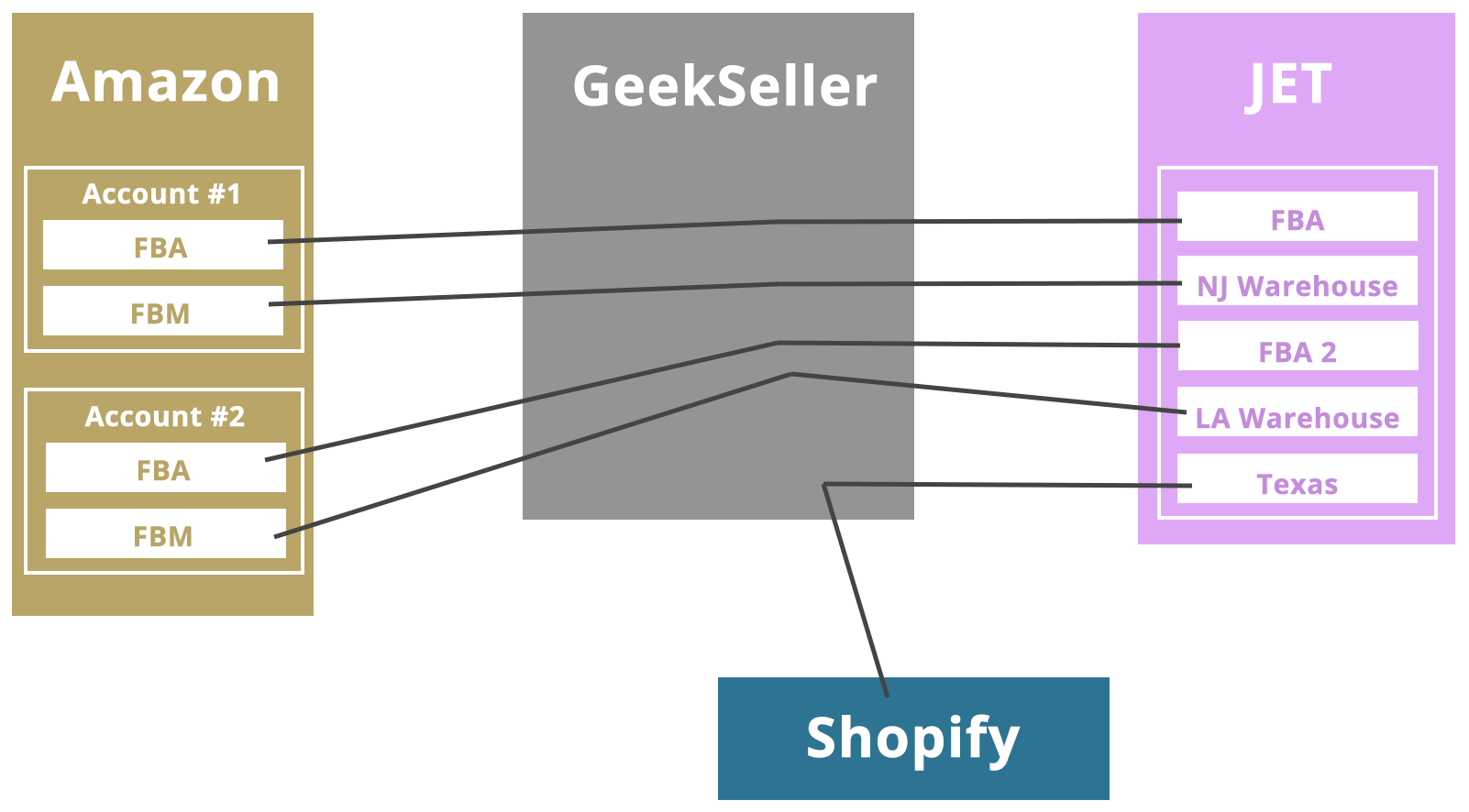 Unlike Jet, Walmart doesn’t ask for multiple nodes, they have a one node representing quantity for a product and rely on you to decide from which warehouse to ship from.

GeekSeller allows you to combine the quantities from multiple Jet nodes and submit them as a single value to Walmart: 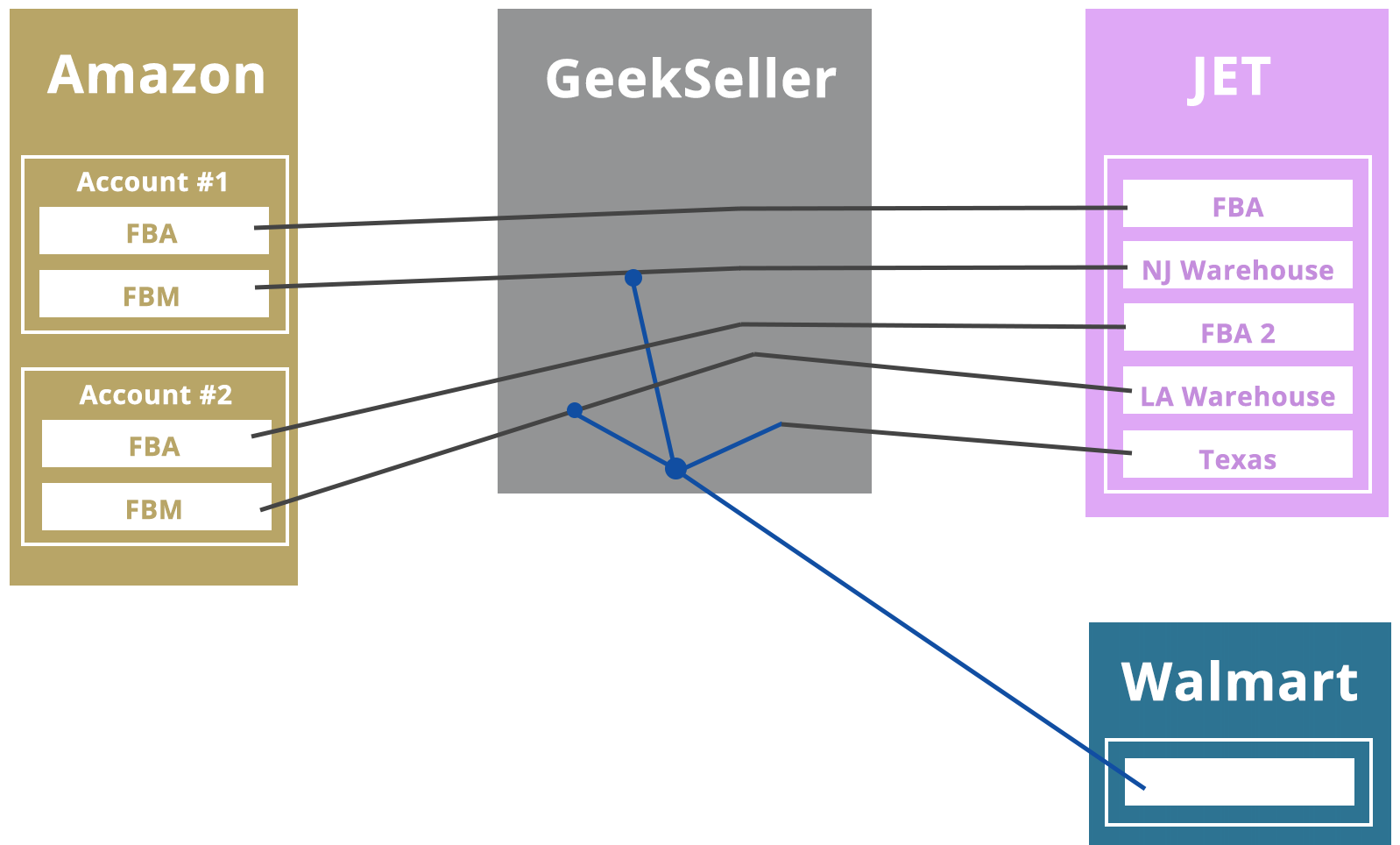 As much as there are limits, we can technically connect things in more complex ways. For example, we can also connect Shopify which will update the Texas node, and then we take a sum of all those nodes and submit the that total to Walmart. 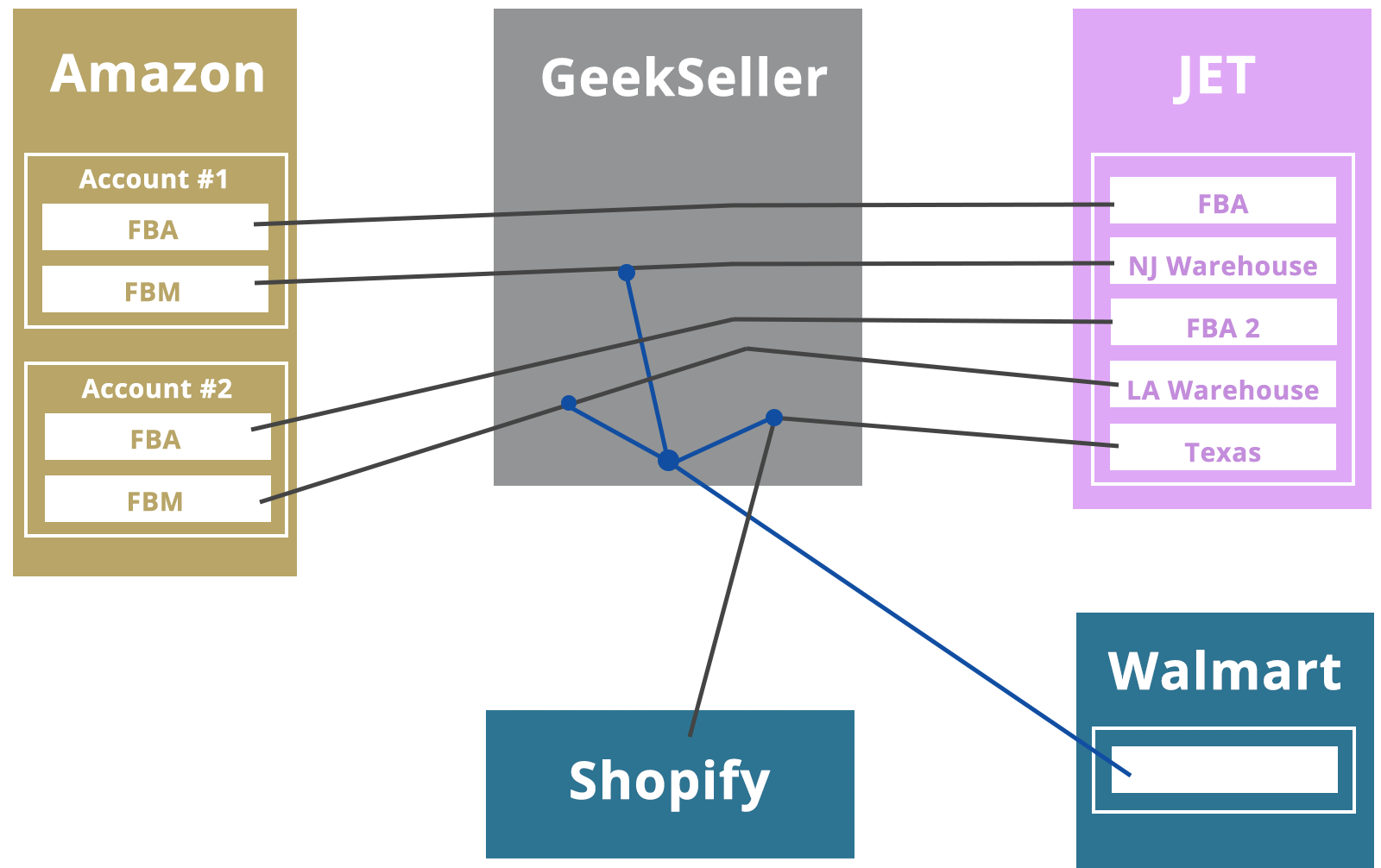 What is not possible is connecting a node to two systems which try to update quantity. For example, you cannot connect Shopify to a node that is already connected to FBA, because FBA already sends data for that node. We cannot ask Shopify to also send information because both systems will keep overwriting the data on the node.